Nyotaimori – Defined as “the Japanese practice of serving sashimi or sushi from the naked body” & “said to have its origins in the samurai period in Japan” (https://en.wikipedia.org/wiki/Nyotaimori)
Specious – Defined as “misleading in appearance”
Spurious – Defined as “not being what it purports to be”
Gohan Sushi – Defines as “Spuriously Specious Nyotaimori”

Don’t get me wrong, the experience of Nyotaimori in and of itself is a cool concept, but I would like to see it done in a more traditional Japanese sense, not with a DJ pounding out Justin Beiber back to back and a group of male new grads dropping business cards in the tip jar. It was an interesting experience, but my main complaint with this particular sushi place is that the sushi was not soy good. The real highlight was going home and having some DQ Frozen Ice-cream cake in our own traditional way.

Overall, here is my list of groups that may enjoy this experience,

Jenna’s Review: 🍤🍚🍘🍢😷
When I first heard about the whole Nyotaimori thing I thought people just have the weirdest idea’s. But I knew I would have to go, for the sake of the blog more than anything. To somewhat quote the great John Mayer, “Your body is a sushi land” would be the best way to describe the experience. Personally I felt somewhat uncomfortable for myself and the girl on the table. Was she cold? Did someone get rice on her? What if she had to sneeze? For myself, was she judging me for taking my 5th tuna roll? Was she?!

It was neat because they kept bringing out new sushi rolls as well as other side dishes like chicken wings, deep fried lobster (I think that is what it was) edamame, and fried shrimp which gave a good variety, but unfortunately the sushi was just not great. It was an all-you-can-eat sort of deal and believe me I can eat my fair share of sushi, but I had no desire to consume my $60 worth. One highlight was that they carried one of my favourite brews, Kronenbourg Blanc, so for that they get a few brownie points.

Steve and Cheryl’s Experience/Review:
Some might say that the idea of eating sushi nyotaimori style (off of a human placemat) is “gross”, “demeaning”, or “gross”. But, don’t fret! The model was more “never-nude” than “actually nude”. Adorned by a floral bikini (gigantic, blossoming flowers), the model laid amongst a constantly changing selection of rolls, wings and other sushi-esq sides. Unfortunately, this was about as interesting as it got. When we walked through the door, we were greeted by dim, red lighting and top 40 music. We were then presented with a small side-plate each, with which to put our wasabi and ginger on. After being sat, we proceeded over to the buffet of sushi to grab a few rolls to start. As a side… Steve refused to be in the picture… a Sushi Party Pooper… but we found a suitable replacement. 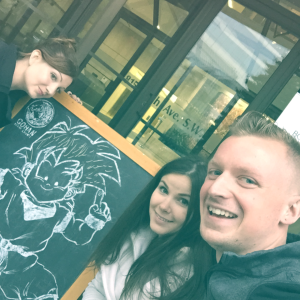 We went without side plates and napkins for most of our meal, stacking our chicken bones and shrimp tails on any empty space we could find. None of the rolls that we tried really stood out, and the wings resembled those that one might bake at home. There was even discussion that the rice on the sushi rolls was comparable to what you would find on the day-old rolls at Sobeys or Superstore. There was a DJ present for the event, but we were quite amused when we didn’t notice a change in the quality or style of the music after the DJ was done his set. On the plus side, they did bring us over a tasty sampling of a scallop dish, and the sushi was “all you can eat” for this particular event.

Gohan’s focus seemed to be more on the experience, than the food. Even then, the experience was overpriced ($60/pp), and sub-par.