When asked what constitutes a 5 outta 5 for Jenna and I we often reminisce about the time in Paris when we stumbled upon a little French restaurant. Unfortunately, “Parc” did not bring result in Déjà vu.

I have never in my life not finished a meal, but I could not finish my white bean and pork cassoulet. Now granted, I didn’t know what a cassoulet is, but I trusted in the fact that I have found everything I ever ordered from a restaurant edible… But this dish was bland and cold, I could not even finish it… Even Jenna was amazed. The beauty of “A Couple of Couples” is my uncultured pallet can be challenged by our dining counterparts, which I believe Alana enjoyed the cassoulet.

All other aspects of the meal were great, or so we may have been convince by our “KillGrave-esque” waiter. I must admit this was the best service I have ever received from any restaurant in Calgary and thoroughly enjoyed the times he was at the table. He would pull away just before he became too much… And leave you wanting more, and he would come just before the thought of more water crept from your subconscious to conscious thought.

Overall, Parc delivered on many aspects… But I just could not get over the food…

I’m going to be totally honest, and I am doing this for all 12 people reading the blog because I know how much they value the honesty. I didn’t really care for Parc Bistro. It’s not that they did anything wrong, but it just didn’t excite me. Maybe I didn’t pick the right dish or maybe I am becoming a restaurant snob, but I wouldn’t rave about it on the street.

The ambiance was nice enough with the wood and the black and white tiled floor, but it was no Casbah. We started with the charcuterie platter and the olives. The charcuterie was standard and the olives were good but I mean how bad can you screw up olives, am I right? For my main I got a duck burger because you don’t hear of those every day, but it wasn’t that remarkable, not terrible but not terrific if you know what I mean. For dessert Mike got eggnog ice cream which I had one bite of then quit. A girl, quitting after one bite. Just think about that. 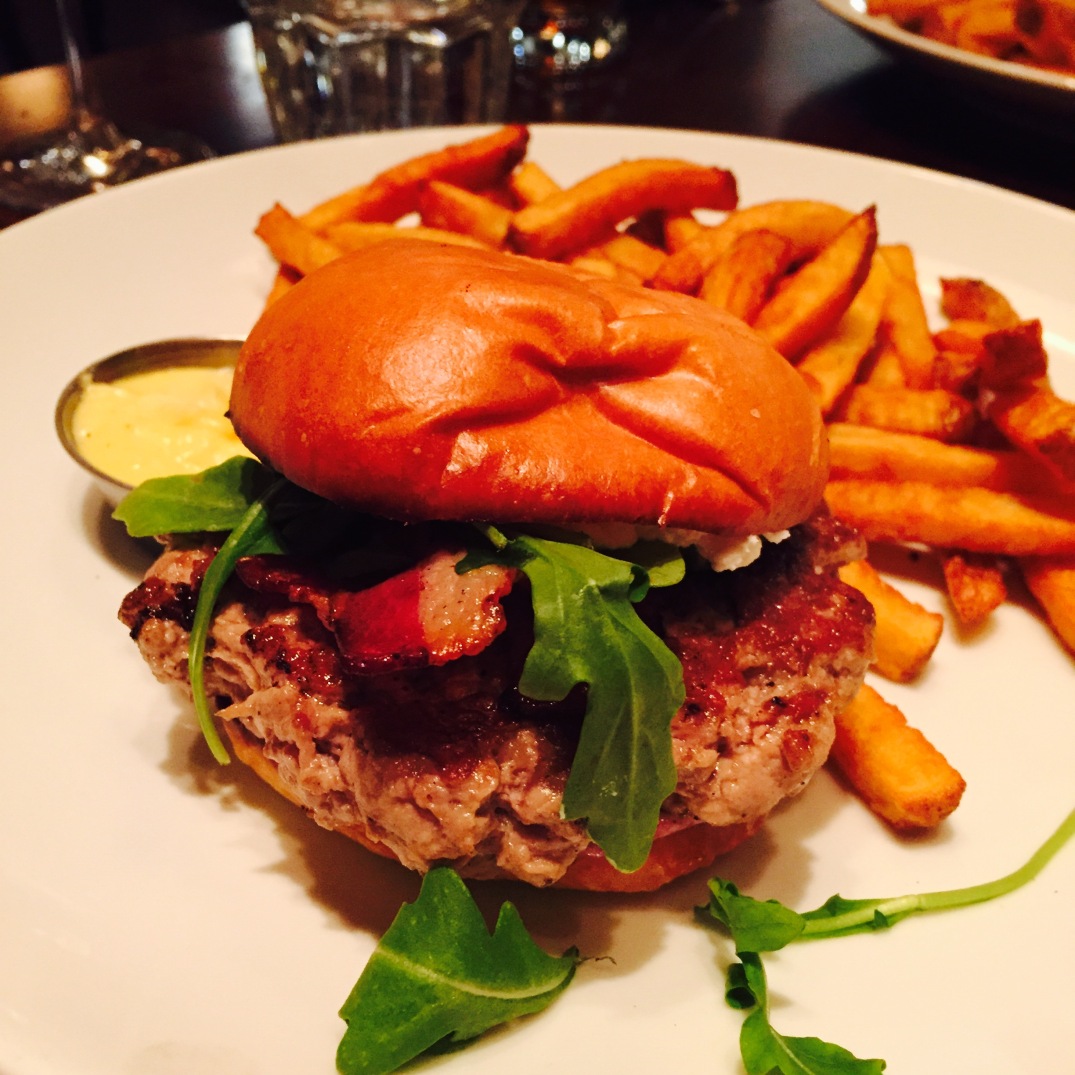 Now it was not all bad, two things that I will give Parc credit for was their great Riesling wine and the superb service. Our server was friendly, fun, fast, and fantastic. 4 F bonus! He did remind me a little bit of Kilgrave (#JessicaJones) but I liked it. I just wanted to do whatever he told me. Quite the influence, I think I would have ordered fish if he told me to, and I am allergic to fish.

At the end of the day, I wouldn’t go back but it was great meeting Alanna and Nathan and spending the evening with them! That I would do again 🙂

Nathan & I had previously dined at Parc Bistro last spring for his birthday. We had such a fantastic experience that I couldn’t say yes fast enough when Mike emailed me to suggest it for our dinner. Having lived in France twice, I gravitate to spots that replicate the fantastic cuisine of the country.

Parc is tucked in behind Tomkins Park, just off 17th avenue, in the space formerly occupied by Trattoria Borgo. Ironically, it’s the first non-Italian venture by Creative Restaurants, owners of Cibo, Bonterra, Scopa, & Posto. The decor is simple (& simply quite French). I love the subway tiles, black & white checkered floors, & photos from different regions around France. I also have grand plans to sit outside in the summer & enjoy the quintessential Parisian cafe experience without leaving Calgary. 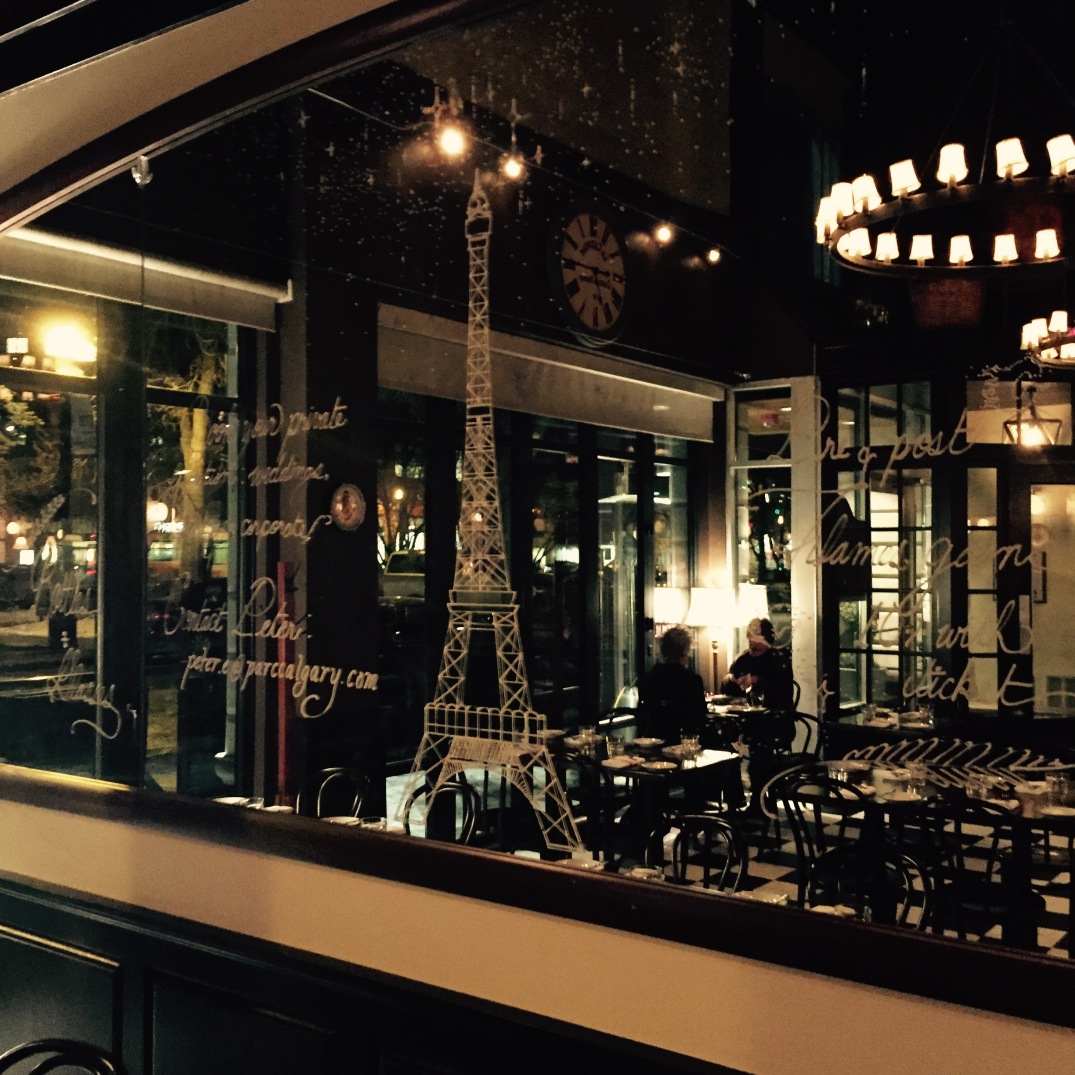 Mike & Jenna had had a few minutes to browse the menu before we arrived (late, sorry guys, we never account for parking!) & had ordered drinks already from our efficient server. I’m not sure if Mike is just really into Jessica Jones right now, but he certainly had us convinced of our servers likeness to Kilgrave. Every one of his suggestions sounded magical & we all had a hard time deciding on an entree. Starters were a little easier, although our server’s descriptions had me yearning for most of the appetizers too. Mike & Jenna suggested the cheese & charcuterie board to start, & we enthusiastically agreed to share. To say we love cheese would be an understatement – our wedding cake was literally three wheels of it. We also ordered olives to accompany it. Before either of those arrived, we were asked if we wanted bread service. Is that even a question? Nathan had joked that the whole reason he was so excited to go back to Parc was for the bread. Their sourdough is as close to perfect as I’ve experienced in Canada. We each topped ours with the butter, salt, & olive oil provided. Is that how it’s supposed to be done? I dunno, but I dig it. 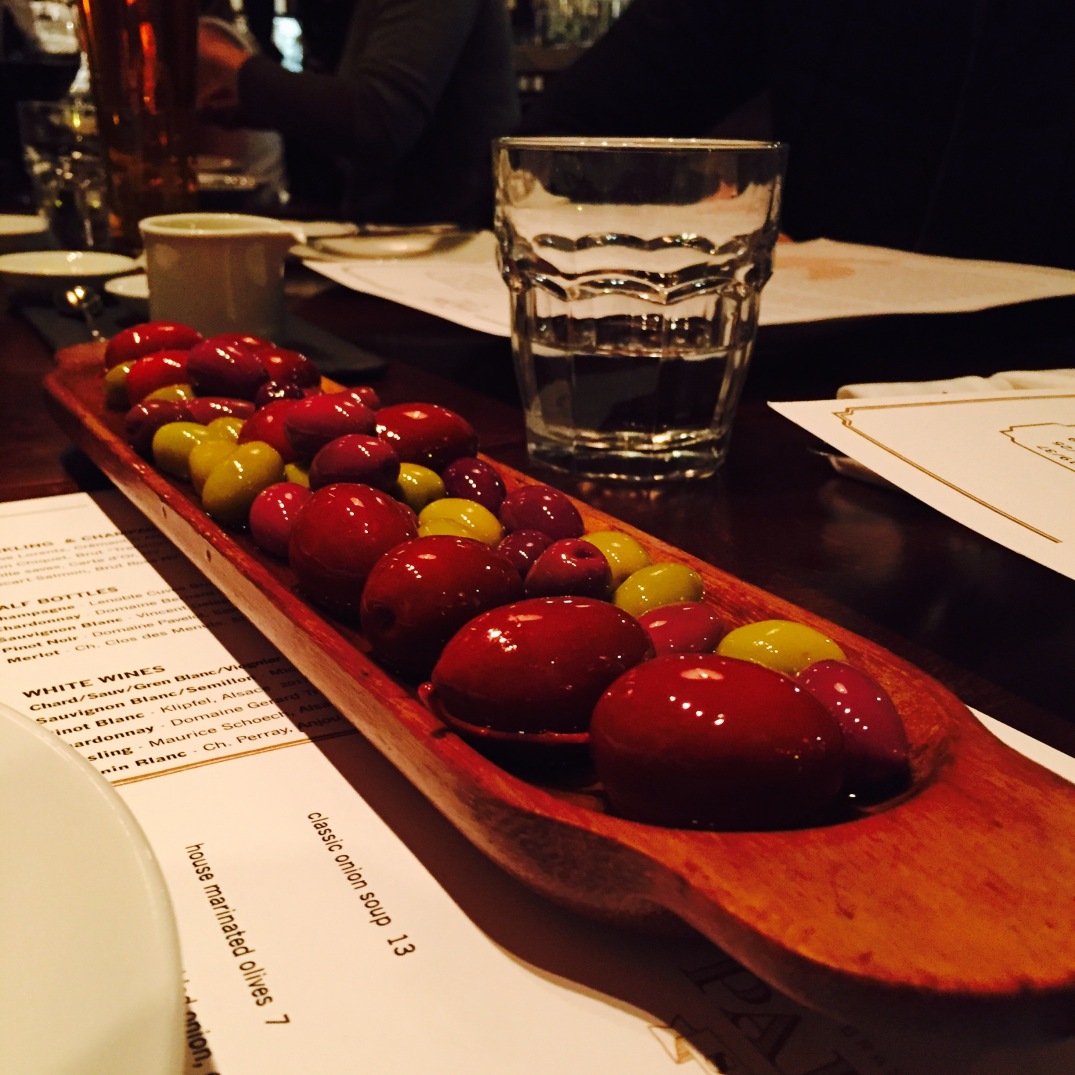 The cheese & charcuterie board that arrived next could have been a piece of artwork, it was so beautiful. & they did not skimp on the olives either. I think there were four varieties on a huge platter, definitely not your usual tiny serving here. I enjoyed all of the cheeses & charcuterie, but I think the most interesting was the blue. I’m used to that more crumbly style of blue you get with a Roquefort, but this one was a harder variety. Blue is by far Nathan’s favourite – the more pungent the better usually. This one wasn’t overpowering & paired well with the charcuterie. We both really liked it.

We finally managed to each choose an entree. Nathan went with the lamb burger & I went with cassoulet, a rich & hearty slow-cooked casserole with white beans & pork. Nathan’s burger was topped with arugula & what he described as a vinegary sauce. He said it was good, but the fries that came with it could have been crispier. I enjoyed my cassoulet too. The pork was a good mix of tender & crispy. The beans & sauce were exactly how I remember from visiting Toulouse. That said, I just don’t think I’m that into beans. Next time I’d probably go for mussels, steak frites, or a croque madame.

At this point, you probably could have rolled me out of there, I was so full (& I didn’t even finish my cassoulet!). I’m a sucker for creme brulee though, so I couldn’t resist sharing their white chocolate & vanilla bean version with Nathan. It did not disappoint! 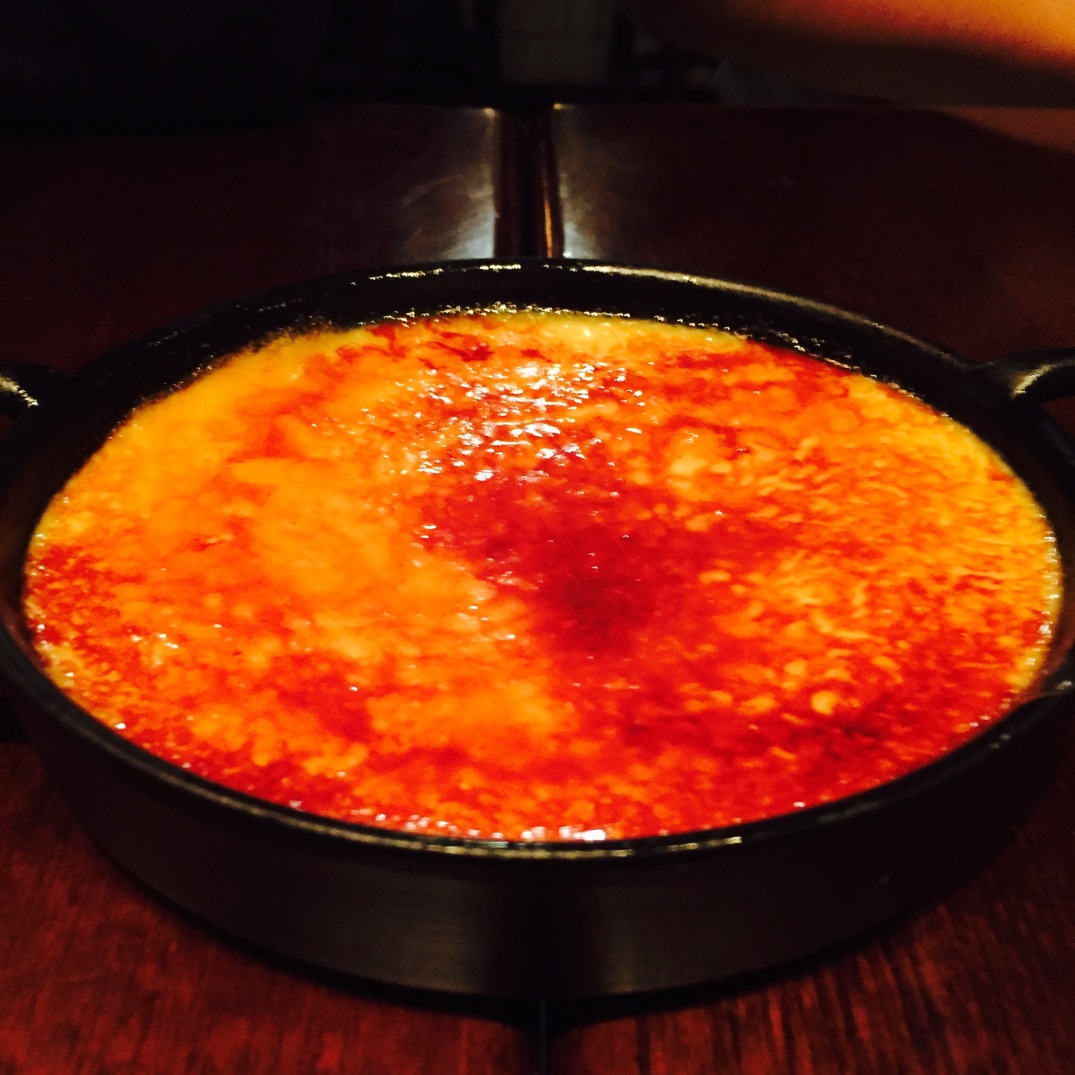 I thought the overall value at Parc was pretty great too. While it doesn’t make for an inexpensive night out, it was less than I would expect for the quality of both the food & service. I would definitely recommend Parc for a nice date night & I’m sure we’ll be back to sample more of their menu.

I couldn’t believe how late it was by the time we left – a true testament to how much fun Mike & Jenna both are. We thoroughly enjoyed their company, as I fully expected having met them a few times at Games YYC nights. It was nice to sit down & have more of a chance to chat though. I’m already looking forward to meeting up with them again sometime!